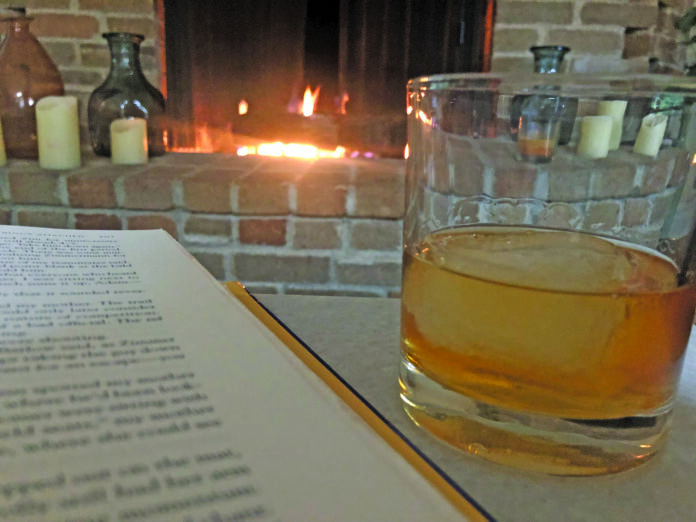 My bearded pal Howard writes: “Perhaps 2023 will be the year of new images, fresh metaphors, formerly unknown similes.”
Not likely.
Probably, it’ll be the year of more musty thoughts, made misty over time. I’ll stand on the porch with a cup of coffee each morning and watch the paperboy race up the street ― one paper for me, another for the lawyer at the end of the cul-de-sac. That’s it. The rest of our street sleeps in darkness.
So be it. Nothing stays the same. Who would want that?
Well, me, for one.
Sort of Celtic, isn’t it, my need for ritual and repetition? I find that those who abandon tradition too quickly tend to flutter in the wind, like hawks before a storm.
Meanwhile, it’s chilly enough for a pair of cords, and the YMCA pool smells of aftershave — courtesy of all the swimmers out to shed their holiday cheese and lunar bellies.
All I know is this will be an operatic spring here in L.A. —reams of wildflowers and tons of gushing waterfalls. Such hikes we’re going to have, in the wake of these big juicy storms.
Some say I am a humorist with a poetic side, which is a little like being a nun with a wild streak. Not sure the two traits should exist in the same person.
True story: Sometimes, when I write, my head spins completely around. That’s when I know I’m on a roll.
“Summon a priest!” my wife Posh used to scream.
“Why?!”
“Your dad’s writing again!” she’d warn the kids.
Like Howard, everyone seems to have plans for me in 2023.
My silvery sidekick Suzanne hopes we’ll take lots of day trips, to make a snowman in the mountains, or bum around old bookstores at the beach.
My pal Emily suggests I teach creative writing at USC, at least till robots can do it, which is still several months away.
I explained to Em that I don’t really care for young people anymore. I coached them in soccer, then I coached them in baseball — a coach with a poetic side. One pitcher, Jessica, went on to play at Harvard, which remains my greatest success story, at least as a coach.
As a father, my greatest success story is that I once replaced a leaky old toilet (the kids still talk fondly about the valuable cuss words they learned that day).
As a coach, my other greatest success story: At least four of my former players have gone on to become doctors.
I tell other coaches that my 10-year-old players looked up at me — their marble-mouthed coach spouting stale metaphors — and thought to themselves: “You know, I think I’ll go into the sciences,” as I stood there struggling to explain the infield-fly rule.
“It isn’t really a rule,” I’d tell them. “It’s more of a philosophy. How do you want to approach life: Safely hugging bases or pinwheeling freely around in hopes of confusing your opponent.”
As if baseball weren’t confusing enough.
Anyway, my record as a coach: Four doctors, a couple of bartenders, one wedding planner, 20 publicists/marketing/sales reps, three attorneys, 27 engineers now building the robots that will one day ruin this world.
The rest of my former players are surfer dudes still trying to figure out their lives. They’ll probably wind up the happiest, bobbing on the waves at 6 a.m. forever. Content. Blissful.
I assure them: “You know, Schweitzer didn’t really get his act together till he was 30. Then he built hospitals in Africa and won the Nobel Prize.”
Speaking of winning, ever heard of the concept of “hygge”? It’s a Nordic thing, like cinnamon buns and loose marriages.
According to the Swedes, when you achieve hygge (pronounced hoo-ga), you’ve found a cozy contentment in life’s simple pleasures: friends, family, warm blankets, candlelight.
Like, at the end of a day of skiing when you take off your cement boots and put your grateful blistered feet up on the fireplace — ahhh!
That’s hygge. You put aside thoughts of bad bosses and evil supermarkets — all the forces that seem out to get you. Exes from Texas. Con men from Connecticut. The Dodgers’ front office.
For the record, here’s the best way to hygge:
• Pull on a pair of socks so thick your shoes don’t fit.
• Pour a double-Maker’s, rocks.
• Flip on some football, turn down the sound and listen to jazz guitarist Kenny Burrell.
As the quarterback stumbles in the snow, wave the cocktail glass in little circles, blending bourbon and ice, as if performing an exorcism, as if releasing souls to heaven.
Including your own.
Such poets, those Swedes. Such filaments in their cozy little hearts.
“Skal”!
A hike through our green and glorious hills is set for Saturday, Feb. 4. Stay tuned for details. For past columns and books, please go to ChrisErskineLA.com.