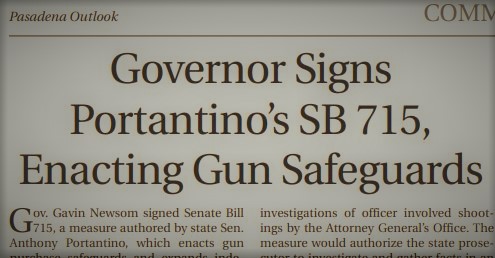 Gov. Gavin Newsom signed Senate Bill 715, a measure authored by state Sen. Anthony Portantino, which enacts gun purchase safeguards and expands independent review of tragic police shootings.
“I am very grateful to Governor Newsom for signing SB 715,” Portantino said in a statement. “This has been a two year effort and hopefully this can help victimized families have a moment of healing. It is an important step toward combatting the gun violence epidemic in our country and improving public safety for all Californians. I strongly believe that if the provisions of in this bill were in effect in 2019, the tragedy that took place in the Poway synagogue would have been prevented.

“Recently, the Pasadena community came together to commemorate the one year since Anthony McClain’s death and SB 715 will also address the need for the type of independent investigation in similar incidents. I thank the governor for signing this important public safety measure into law. Our communities will be safer because of it,” he added.
SB 715 addresses concerns related to the tragic synagogue shooting in Poway. The bill closes the loophole that led to the synagogue shooting that left one person dead, where the perpetrator of the shooting was able to purchase a rifle, despite being under 21 and not having a valid hunting license. The validity of the hunting license used to facilitate the purchase was not verified because existing law did not require such verification during the 10-day background check process.
SB 715 also clarifies what qualifies as an unarmed civilian to prompt independent investigations of officer involved shootings by the Attorney General’s Office. The measure would authorize the state prosecutor to investigate and gather facts in an incident involving a shooting by a peace officer that results in the death of a civilian if there is a reasonable dispute as to whether that civilian was armed.
Last year, a Pasadena Police Department officer fatally and tragically shot civilian Anthony McClain. It is being disputed whether Mr. McClain was armed and therefore the incident was not eligible for a DOJ investigation.
“Providing independent investigations of police violence and ensuring that all background checks are conducted thoroughly can help make sure that everyone is accountable for gun violence and in turn prevent future shootings,” said Cindy Montoya, a volunteer with California Moms Demand Action. “We’re grateful to Governor Newsom for signing this critical legislation and working to prevent police violence in our communities.”
“SB 715 cements the Senator’s legacy as one of California’s most ardent gun safety reform advocates,” Portantino’s office said in a statement. “He has a long history of advocating for smart and sensible solutions to our nation’s tragic history of gun violence.”
In 2019, Newsom also signed Portantino’s SB 172. The bill enacted a slate of significant provisions related to firearms storage by broadening criminal storage crimes, adding criminal storage offenses to those offenses that can trigger a 10-year firearm ban and creating an exemption to firearm loan requirements for the purposes of preventing suicide.