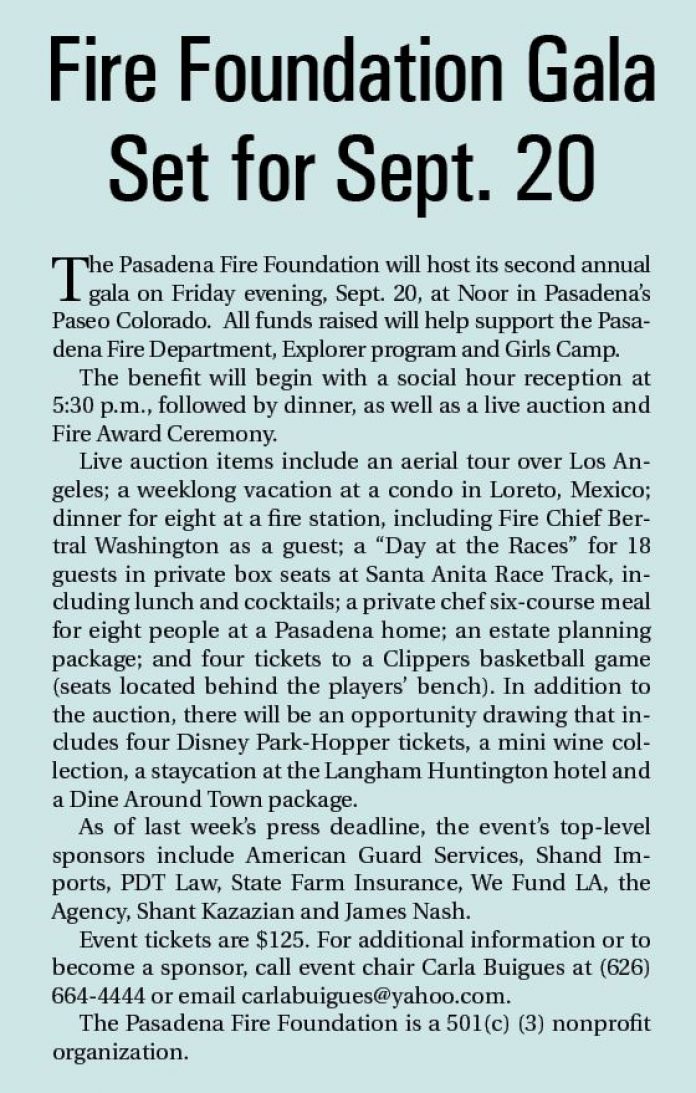 Who’s up for supporting Pasadena’s first responders?
You know, those men and women who risk their lives to save yours and protect your health against fires, medical emergencies and hazards, 24-7.
Well, Daniel Arias, board chair for the Pasadena Fire Foundation, is betting a lot of people will in fact want to support the Pasadena Fire Department and the community outreach it hopes to achieve.
“We really want the foundation to be able to do something really special for the community,” Arias said. “I’d love for it to really be an avenue to engage with the community, to build a bridge between the foundation, the department and the community to work together and raise funds that can be used to support the many programs at the Fire Department that may not be covered in the city’s budget.”
Although the foundation has existed on paper for nearly 10 years, it lay dormant for most of that time, with a board of only two people, who just made sure the PFD had a fiscal receiver for any rare donations that came its way.
But when the city of Pasadena hired Fire Chief Bertral Washington in 2014, one of the first things the Southern California native noticed was the lack of an active foundation, like the one he worked with as a chief in the Las Vegas area.
He reached out to two of the first people he met in the city, Arias and another whom he knew to be an active member in nonprofit work and who was on several boards across the Pasadena charity network: Carla Buigues, who is also vice chair at Leadership Pasadena. One of the first things Washington did to immerse himself in the city’s culture was to participate in that nonprofit’s annual leadership training, which also helped him realize just how successful an active fire foundation could become.
“The community here is incredibly engaged in city civic life, more than any other city I’ve ever lived in. Just from going to City Council meetings, town halls, district meetings, I could tell that the way the local government really presents things to the public and the way our public officials listen — well, it was obvious that these citizens are highly involved,” Washington said of his first impressions upon taking over his new position. “Since I’ve come on board, one of the things I’ve often heard from people in the community is that they want to help. They have a passion for what the Pasadena Fire Department is trying to do, and this foundation is a really tangible way to help us do it.”
Buiges got to work quickly, organizing an initial “friend raiser” at her real estate agency, and began to spread the word that the foundation was looking for a new board.
“We were going to get this thing off the ground,” she recalled. “Our biggest focus was trying to grow a diverse board and get the awareness out of all the programs the Fire Department supports.”

Those programs include youth in education advocacy, such as the Explorer program, a nationwide effort that is supported locally at each city’s fire department. The intent of the program is to educate Pasadena youth about the fire services in general, and specifically about the PFD. The career guidance and development program has been in operation for 25 years, and is an extension of the “Learning for Life” career education program with a special emphasis on fire service. The main goal of the PFD Explorer Post is to train community youth to become firefighters or first responders.
The Explorers are typically high school students, or students up to age 21, who are interested in the fire services and the mentorship provided by firefighters. The program has doubled in size to about 25 students in the past few years, and with the program’s headquarters located at Station 33, the kids meet every other Saturday and can come after school.
With the goal of helping support and grow the Explorer program, Buiges and Arias got to work in 2018 to organize the foundation’s inaugural gala, which exceeded their expectations. They used the money it raised to completely renovate the Explorer room.
“It was this old, dark, uninviting space that really was used to house the equipment and uniforms and everything the program had to its name in that little room,” Arias said. “We saw the opportunity to create a safe and welcoming environment there where the Explorers could really have a space to have meetings, do homework and just continue on to really get fully immersed into a life in the fire service.”
Although the program is still in the process of being redefined (with a larger, more inviting space, they can further grow the program), the fire foundation is turning its sights on raising funds at this month’s second gala to help create scholarships for students to attend training camps that promote life skills and a life in fire services or as a first responder. There is a newer girls’ camp, also focused to recruit young women into fire services, to which the foundation hopes to send female students with the help of scholarships.
That is part of a bigger push by Washington to diversify the PFD. Currently, he noted, it has an overall female representation of 5%, higher than the national average of 2.5% but still well below the level he would like.
Washington recalled when, back in the day, he and a team of four men and one woman responded to an assault on a female victim. As they approached her while she sat on a curb, Washington could tell how their presence made her afraid. He was so happy to be able to assign the lead to the young woman on the team.
“We serve a very diverse city, and when we as firefighters can reflect the city we serve, it really helps us do a better job,” Washington noted. “If we can provide training to help more women become successful in our recruitment program and become firefighters, it’s a win for everybody. Once they get their hands on some training through camp, see other women doing it, they get the confidence in achieving longer-term programs.”
Going forward, the foundation has goals to provide the PFD with funding for new “emergency-equipped” bicycles, which are life-saving at venues like the Rose Bowl or in heavily trafficked events. Other equipment, like emergency-equipped golf carts — which can even have a gurney and transport a person to an ambulance — is also on the wish list, along with infrared cameras to spot an individual trapped in a smoke-laden fire.
And after that? Now that the foundation is up and running on all cylinders and led by 15 board members, the nonprofit will soon be crafting its five-year strategic plan to better support the PFD. That plan will create progressive community outreach, Arias said, through year-round training and educational programs to teach children and adults about fire prevention, safety and disaster preparedness, as well as work with related charities and volunteer organizations. Through these efforts, more and more people become ready and aware to survive major catastrophes, give their support for victims and live safely day-to-day, the foundation has asserted.
“It’s important that the community has a strong level of trust for their first responders, including the Fire Department, so bridging that gap between the public and the department is really a unique opportunity to do so,” Arias added. “Five years from now this is going to be an impressive organization that will be making a huge impact on the community, and we are going to be doing some amazing things.” 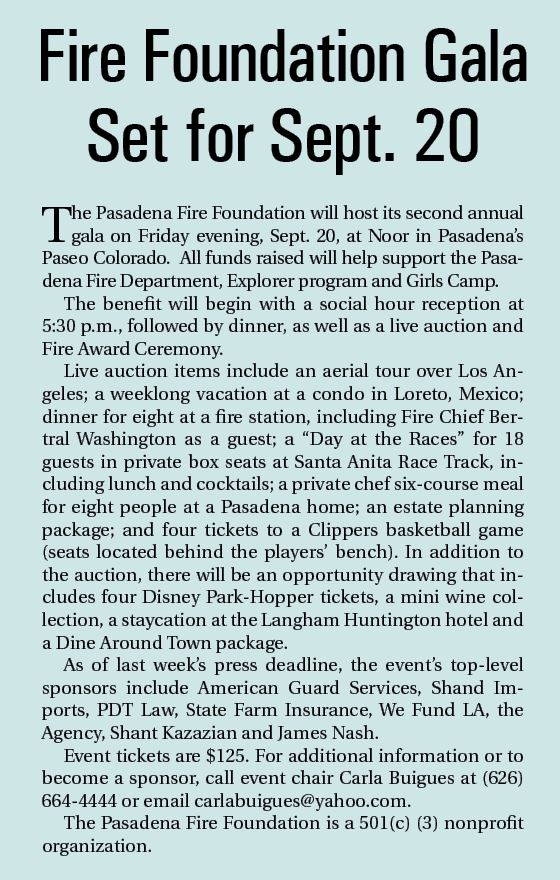