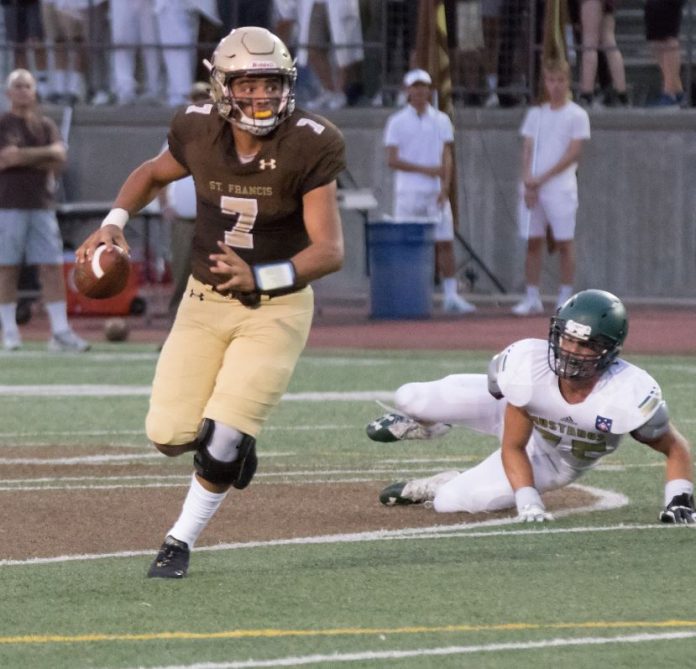 During the second half, the St. Francis High School student section loudly sang “Sweet Caroline,” A fitting song because Golden Knights football never seemed so good as the varsity team cruised to a 48-21 victory over visiting Mira Costa of Manhattan Beach last week.
In the first half, new quarterback Darius Perrantes, a junior transfer from Encino Crespi, initially started off slow but everything started to click after his first touchdown. Near the end of the first quarter, senior Greg Dulcich broke away from the Mira Costa corner, and Perrantes completed a 38-yard touchdown pass, and there was no looking back for the St. Francis offense.
The Mustangs (0-1 overall) quickly responded with a touchdown pass of their own, and it seemed as if both teams were evenly matched.
On the ensuing drive, Perrantes completed another touchdown pass to Dulcich and later connected with Isaac Cordova for a 64-yard touchdown.
The Mustangs didn’t give up and kept the game within reach after a touchdown midway through the second quarter, cutting St. Francis lead to 21-14 at the half.
The tide turned for the Golden Knights after the second-half kickoff. A long kick return set up great field position for Perrantes and the offense, and St. Francis wasted little time to extend its lead. Perrantes connected with Andrew Monarrez for his fourth touchdown on the second play.
“When we scored really quick at halftime, it kept us really hyped up,” said Dulcich.
Soon after, Will Stewart and the Golden Knights defense recovered a fumble. On the following play, Perrantes threw his fifth touchdown of the night to Dulcich, who undoubtedly was his No. 1 target. The senior receiver finished with six receptions for 135 yards and three touchdowns.
“He’s a great athlete with a big body,” said Perrantes. “He just loves to fight for the ball every play.”
Within a minute and a half, St. Francis scored two touchdowns and built a 21-point lead, thwarting any chances of a Mira Costa comeback.
Undoubtedly, the player of the night was the Golden Knights’ new quarterback. He completed 14 of 26 passes for 322 yards, six touchdowns and an interception.
“I was impressed with his athleticism, and his ability to keep his eyes downfield, but we need to work on our pass protection because he was running for his life a couple times,” said SFHS head coach Jim Bonds.
Perrantes’ athleticism was on full display in the second half when the Golden Knights faced third down and 8 and the pocket collapsed. The St. Francis quarterback scrambled for a 23-yard gain, finishing with a total of 60 yards.”
After the game, Perrantes pointed out, “I think I’m 60% passing, 40% running.”
Despite the win, Bonds saw plenty to work on going forward.
“We’re just trying to get ready for league,” Bonds said, “and taking it one week at a time. I know it sounds cliché, but we have a lot to work on with our own team. We have a lot of room to improve still.”
The Golden Knights will travel to Pasadena for a nonleague game this Friday, Sept. 8, at 7 p.m.