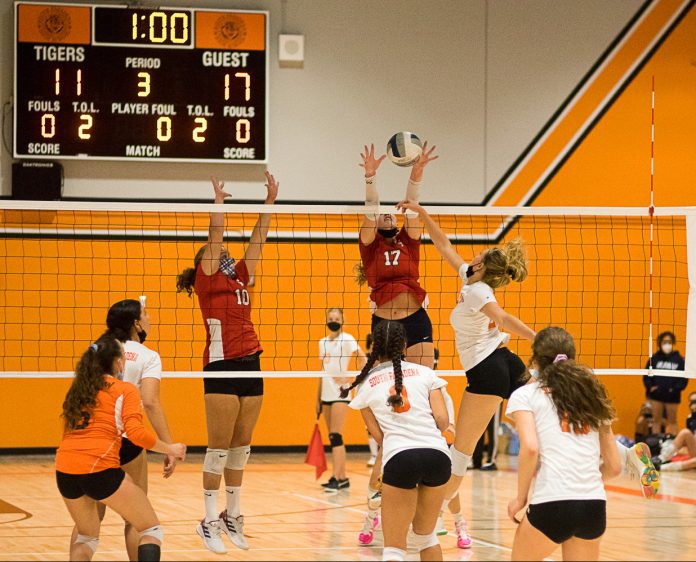 First published in the Sept. 23 print issue of the Pasadena Outlook.

Flintridge Sacred Heart’s varsity girls’ volleyball team broke even at the Durango Fall Classic, finishing the two-day tournament with a 3-3 record. After losing both matches on the first day, the Tologs bounced back and won three of four of Saturday’s matches.
FSHA’s first match on Saturday was against Ironwood Ridge of Tucson, Arizona, sweeping its out-of-state competition by scores of 25-18 and 25-21. Senior Peyton DeJardin had a team-high 10 kills while junior Nikki Garriola and sophomore Luisa Madrigal added six and four kills, respectively. Sophomore Lindsey Du and senior Milena Andrade each had three aces while Garriola and junior Charlotte Taylor added one. Senior Caitlin Du was stellar on defense with a team-high 10 digs, while Andrade, Garriola and DeJardin each added three.
FSHA (9-7 overall, 1-1 in league) played another out-of-state opponent, Galena of Reno, Nevada, which the Tologs swiftly swept by scores of 25-11 and 25-18. DeJardin’s team-high 10 kills helped propel FSHA past Galena. Garriola followed with eight kills, as junior Kiera Limon, freshman Piper Scherbert and Andrade each added one kill. Caitlin Du and Garriola had four aces each. Defensively, six players combined to tally FSHA’s 33 team digs — Caitlin Du (nine), Andrade (seven), DeJardin (six), Lindsey Du (five), Garriola (three) and Madrigal (three).
FSHA’s third win of the day saw the Tologs sweep Rancho Cucamonga by scores of 25-20 and 25-21. DeJardin had nine kills and digs while Garriola added four kills and six digs. Limon and Madrigal added two kills, while Andrade and Scherbert tallied one to round out FSHA’s 19 team kills. Caitlin Du did well defensively with a team-high 10 digs, Lindsey Du added four, Taylor had three, Andrade added two and Scherbert tallied one.
FSHA’s only match loss on Saturday came against Palo Verde of Las Vegas by scores of 21-25 and 14-25. Garriola and DeJardin led the offense with six and five kills, respectively, while Andrade added one. Garriola also did well defensively with a team-high seven digs. DeJardin and Taylor each added five, Caitlin Du and Andrade added four, and Scherbert, Lindsey Du and junior Emily Smith each tallied one dig.

MAYFIELD SENIOR
Mayfield Senior (12-4 overall, 6-1 in league) extended its winning streak to two matches with a Prep League victory over Flintridge Prep on Thursday, Sept. 16. The Cubs defeated the Wolves by scores of 25-21, 25-13 and 25-19.
The day before, Mayfield Senior bounced back with a sweep of host Providence of Burbank by scores of 25-9, 25-21 and 25-19 in the Cubs’ sixth league match of the season.
Most recently, Mayfield Senior was swept by host South Pasadena in a nonleague match by scores of 23-25, 22-25 and 17-25.
No individual player statistics were provided for any of the matches.

FLINTRIDGE PREP
Flintridge Prep (8-6 overall, 3-4 in league) had an excellent bounce-back performance, snapping its two-match losing streak with a league victory at Arcadia Rio Hondo Prep on Sept. 18 by scores of 16-25. 22-25, 25-20, 25-13 and 21-19.
Earlier in the week, Prep played host Mayfield Senior in a league match and lost by scores of 25-21, 25-13 and 25-19.
Prep dropped a league match against visiting Chadwick of the Palos Verdes Peninsula, 3-1, on Tuesday, Sept. 14.
No individual player statistics were provided to The Outlook.

MARANATHA
Maranatha (2-10 overall, 0-2 in league) lost to host Valley Christian of Cerritos by scores of 25-19, 27-25 and 25-19 in a league match on Thursday, Sept. 16. Player statistics for this match were unavailable by the Outlook’s press deadline.
Two days earlier, on Tuesday, Sept. 14, Maranatha lost to visiting Whittier Christian of La Habra in a league match by scores of 20-25, 25-23, 17-25, 25-22 and 13-15.
Despite the loss, the Minutemen had several fine individual performances. Sophomore Abigail Yeoh led the offensive charge with a team-high 11 kills, as freshman Belen Casillas and junior Jada Dixon followed close behind with six and four kills, respectively. Senior Maddie Kwan and sophomore Lauren Nguyen each added one. Casillas, Dixon and senior Kam Asaoka did well on serving, adding two aces each. Nguyen and Coates set up the offense with 13 and nine assists, respectively.
Asaoka had a team-high 14 digs while senior Zoe Sabado and sophomore Tori Coates added 13 and 12 digs, respectively. Nguyen had nine digs, Casillas had seven, and Dixon and sophomore Kira Foster each added one.

WESTRIDGE
Westridge (2-5 overall, 2-4 in league) was defeated by visiting Chadwick of the Palos Verdes Peninsula in a league match on Friday, Sept. 17. This followed a 3-0 Prep League match sweep of Arcadia Rio Hondo Prep by scores of 25-23, 25-12 and 25-15.
No individual player statistics were made available for either match.