First published in the Sept 9. print issue of the Pasadena Outlook.

Maranatha High School hasn’t quite found its footing after losing to Flintridge Prep, three games to two, and Crescenta Valley High School of La Crescenta, 3-1, in nonleague matchups on Aug. 24 and 26, respectively.
Despite the two-match losing streak, Maranatha’s standout offensive performer was sophomore Abigail Yeoh, who led the team with 17 kills in five sets against Crescenta Valley. Behind Yeoh were freshman Belen Casillas, junior Jada Dixon, and sophomore Lauren Nguyen with nine, seven and five kills, respectively. These four players accumulated 38 of 40 team kills on the evening. Nguyen and sophomore Tori Coates led the team with 20 and 18 assists, respectively, while senior Zoe Sabado tacked on two herself.
Sabado and Kam Asaoka had terrific games, each tallying 19 digs and accumulating over half of the team’s total digs (64).
The nonleague contest result between Maranatha (2-6 overall) and visiting Immaculate Heart High School of Los Angeles was unavailable for the Outlook’s press deadline. The Minutemen are scheduled to host Buckley School of Sherman Oaks in a nonleague matchup today, Sept. 9, at 5:30 p.m.

Mayfield Senior’s varsity girls’ volleyball team has been competing nonstop, finishing 2-2 in tournament play before shutting out their first two Prep League opponents Westridge School, 3-0, on a neutral court and Rio Hondo Preparatory School, 3-0, on the road on Aug. 31 and Sept. 2, respectively.
With the victories above, the Cubs (8-2 overall, 2-0 in league) have a firm grip on first place in the Prep League while riding a two-match winning streak.
The result of Mayfield Senior hosting Polytechnic on Tuesday, Sept. 7, was unavailable by the Outlook’s press deadline. The Cubs are scheduled to play Palos Verdes Peninsula Chadwick in their fourth league match on Thursday, Sept. 9, at 5:30 p.m.

La Salle College Prep has been unstoppable during its three-match winning streak dating back to Aug. 24 when the Lancers defeated South Pasadena on the road in nonleague matchup, 3-0.
The Lancers (6-2 overall) also defeated Flintridge Sacred Heart Academy, 3-1, and La Cañada High School, 3-0, in nonleague matchups on Aug. 27 and 31, respectively.
The Lancers are scheduled to hit the road to play Saint Joseph High School in Lakewood in their first Del Rey League game on Tuesday, Sept. 14, at 6 p.m.

The Polytechnic varsity girls’ volleyball team is off to a scorching start, even after falling to powerful La Cañada on the road 3-1 in a nonleague match on Aug. 24, their only loss of the season. However, the Panthers immediately bounced back with a 3-1 victory against visiting Monrovia in a nonleague matchup on Aug. 31.
Polytechnic (6-1 overall, 1-0 in league) hosted and defeated Palos Verdes Chadwick 3-2 in Poly’s first league game on Sept. 3.
The Panthers are scheduled to play Rio Hondo Prep in Arcadia for their second Prep League game of the season today, Sept. 9, at 5 p.m.

Flintridge Preparatory School’s three-game winning streak was snapped after a 3-1 Prep League loss against Palos Verdes Chadwick on Aug. 31. The Wolves (5-3 overall, 1-1 in league) bounced right back in their second league contest, defeating Westridge at home, 3-2.
Before the loss, Flintridge Prep defeated Alhambra, 3-0, and Maranatha, 3-2, after finishing 2-2 in tournament play.
The Wolves are scheduled to play St. Genevieve High School in Panorama City in a nonleague on Wednesday, Sept. 8, at 6 p.m.

After Westridge School’s varsity girls’ volleyball team won its first Prep League game on the road against Arcadia’s Rio Hondo Prep, 3-0, on Aug. 27, the Tigers dropped their next two to move 1-2 in league and 1-3 overall.
Mayfield Senior, Westridge’s opponent on Aug. 31, defeated the Tigers 3-0 on a neutral court. Then, in a much more competitive match, Westridge was defeated 3-2 on the road by Flintridge Prep on Sept. 3.
The Tigers are scheduled to host Rio Hondo, the second matchup this year between the two programs, in their fifth league game on Friday, Sept. 10, at 5:30 p.m.

After a 4-1 start to the season, Flintridge Sacred Heart Academy dropped its last two matches between La Cañada and South Pasadena at home in nonleague contests on Sept. 1 and 2, respectively.
During FSHA’s two-match losing streak, senior Peyton DeJardin and junior Nikki Garriola had outstanding performances leading the team with a combined 33 and 18 kills, respectively. Senior Milena Andrade led the team with a whopping 46 total assists, 25 against La Cañada, and 21 against South Pasadena.
Senior Caitlin Du was excellent as well, tallying 30 total digs over the two-game span. Following closely behind Caitlin were DeJardin and Garriola, with 20 total digs each, and freshman Ally Du had 10 total digs.
FSHA is scheduled to hit the road to face Notre Dame of Sherman Oaks in the Tologs’ first Sunshine League game today, Sept. 9, at 6 p.m. 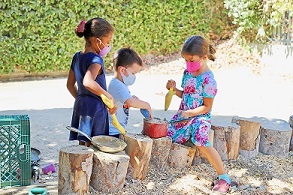