The women of the Pasadena Guild of Children’s Hospital traditionally welcome their new members at the annual meeting in February. However, that meeting occurred online this year, so a small gathering took place on April 20 to welcome the new active members of the Guild.
Since there were limited opportunities for involvement in 2020, both 2020 and 2021 new member classes were included in the session to receive an orientation on the many activities required of all active members in order to flawlessly execute the annual Debutante Ball. The June Ball, which had to be cancelled last year, is moving to November, and is affectionately being called “The June Ball in the Fall.”
Established in 1947 by a small group of dedicated hospital volunteers, the Pasadena Guild has raised more than $30 million for Children’s Hospital Los Angeles. In recent years, the Guild has successfully completed eight endowments, in addition to partnered endowments with the Saban Research Institute, and funded one capital campaign. The Guild’s current project is a $3 million endowment of the Pasadena Guild Chair, Pediatrician-in-Chief and Senior Vice President of Academic Affairs at Children’s Hospital Los Angeles.
“While 2020 was a disruption to the normally busy fundraising calendar for the Guild, the welcoming of these new members, ready to roll up their sleeves, sets the stage for the Guild to get back on track with their mission to benefit CHLA,” a spokeswoman said. 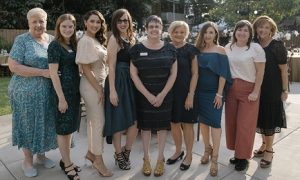