College Access Plan Pushes for Equity, One Student at a Time

After more than a year of living under a pandemic cloud, College Access Plan founder and Executive Director Mo Hyman has found a way to celebrate silver linings.
And with reason, since CAP — a nonprofit advocate for four-year degree college access and attainment for underserved, underrepresented students — has achieved a lot recently to celebrate in 2021, its 15-year anniversary.
For one, CAP helped defeat the use in California of the SAT/ACT, that formidable and much-dreaded test that has long determined a college-bound student’s fate. CAP was one of six organizations that joined in bringing civil rights action against the University of California and its use of standardized exams in admissions decisions. The plaintiffs won a preliminary injunction, later upheld by a California First District Court of Appeals, barring the UCs from using the scores to determine acceptance.
Although CAP had spent years developing a competitive SAT/ACT preparation course for the program’s high school students, the barriers some of them faced were close to insurmountable. Even more difficult, local exam sites were cancelled during the pandemic to comply with state and county health orders. With reports of upper socio-economic families driving or flying out of state to take the exam, CAP’s students seemed all but doomed until the court’s decision was announced. California State University soon followed suit, suspending the use of the tests to determine acceptance through 2023.

“There was about 40 years of research that was pretty compelling, showing that the tests are biased, racially and ethnically biased, but what became clear during COVID was just how those inequities were playing out in the real application process,” said Hyman, noting that CAP had been in the throes of decoding barriers to better help underserved high schoolers have test preparation. “We had invested a lot time, money and energy developing a test prep curriculum that focused on this generation of college goers, but at the end of the day, we had so much knowledge and frustration with what we knew to be true about those inequities … and if what had been in practice was actually a civil rights violation?
“We had to stand up for our students, and fight for what was best for them,” she continued, “If that meant we’ll have to offer new things and set our SAT curriculum on fire, then we set the SAT curriculum on fire.”
Hyman’s passion has been reflected in CAP’s rapid growth since it began in 2006. Serving about 1,500 students per year across all Pasadena Unified School District high schools and middle schools, as well as alternative schools like Rose City High School and CIS Academy, CAP sets students on a path to college — and to a better life.
“We need to start thinking differently about how we talk about the value of college, because it unequivocally is still the best route out of poverty, it is still the best route to a meaningful and fulfilling career,” she said. “But it’s a complicated process and different for everyone — it’s no longer something you can talk about with a hammer, one-size-fits-all approach, and you have to step up the messaging around that.”
With a motto of “No barriers. No requirements. No limits,” CAP has doubled down to help guide the way to college for its students. It offers — for free — services that can cost as much as $10,000 elsewhere, including curating college lists, perfecting personal statements and essays; preparing financial aid support, college selection and enrollment; and identifying scholarship and grant opportunities. Taking a tailored, one-on-one approach, CAP’s dedicated staff nurtures students’ personal and professional growth and encourages broad exploration of possible careers and civic landscapes.
CAP has focused not only on getting PUSD students into college, but through college. For first generation college goers, the process is filled with confusing and frightening first steps, including how to secure financial aid and fill out the resulting paper work, a jumble of legalize, especially for parents who are not native English speakers. CAP’s “I Heart College” program tackles college retention through a summer preparation program and encouraging cards, care packages and check-ins throughout the year.
For Pasadena High School graduate and UC Irvine sophomore Isaiah Raya, CAP’s programs were so meaningful he was eager to pay it back by serving on the nonprofit’s Student Advisory Council, which mentors younger students as they navigate the college readiness process.
As a PHS student, Raya recalled, CAP helped him realize his potential for college and provided him with tools to get there.
“No one in my family had gone to college, so I really didn’t know anything about it and hadn’t given it much thought,” said Raya, a computer science major. “The whole process felt really overwhelming; I didn’t even know anyone who’d been to college that I could ask questions of … CAP offered crucial support, and it was such a warm and friendly environment, you could drop in anytime and ask anything.”
Raya’s mom was a big advocate for him, too, he noted, and she also came to CAP to learn about the financial aid component and how she could best provide support.
The college program has kept all the current and alumni CAP students in touch, creating a community of support, which is something Raya now helps lead by mentoring and writing blog posts. Coming to college and rooming suddenly with three other young men he didn’t know, Raya struggled at first to find his place, and understands what others might go through.
“In college you really realize how big the world is and how many different backgrounds people have. Some of it was pretty intimidating, but then I felt I could be just as challenged as them,” he added. “Being able to go to CAP was very fundamental to my preparedness and my whole college experience.”

BREAKING PANDEMIC BARRIERS
During the pandemic, CAP took all of their programs online and via Zoom, which in some ways has strengthened the curriculum, but also laid bare the inequities faced by its students. Some were doing online school with multiple siblings, fighting for bandwidth, struggling with ever-freezing screens or the ability to concentrate while sharing space with family members. Others were taking care of younger siblings or a household where a parent or grandparent had fallen ill, or died, of COVID-19, while also reeling from that loss. Other students still had to take on jobs to help support the family if someone had lost their income.
“It was barrier after barrier after barrier,” Hyman noted grimly. “A lot of students were able to figure it out and work their tails off and get through it, but there are certain things that were just outside of their control; it was a constant battle.”
CAP is ready to emerge post-pandemic stronger and better than it did before, Hyman said, a challenge echoed by Innesa Ranchpar, director of programs. The nonprofit is ready to dig in to the tried and true programming this coming academic year.
“We are doing so many things in the fall, including a personal statement crash course which I’m excited about. Our core foundation in programming is strong but I see us diving deeper and closing the gaps, teaching tools for success that our students will take with them,” Ranchpar said. “We want to focus on the areas we know our students can strengthen, like building their scholar profile, and helping them learn the parts of a college application that hold the most weight — so many of our families aren’t informed about that. Also, we want students to do well early on so they might qualify for merit-based aid … the whole process has to be very intentional.”
CAP will also reinforce advocacy for its students, Hyman emphasized, pushing for change and rallying community support to help more students have access to college and all it symbolizes.
“Advocacy in all its forms means really pushing the needle on the big barriers to access for our core student population,” she said. “We want to be very proactive in combating those inequities we have seen laid bare during this time — we want to come back better than we came into this [pandemic]. We better take something away from this. If we just say let’s go back to normal and we all reboot to 2019, 2.0, then we didn’t do a very good job of paying attention.”
While it will be celebrating its 15-year anniversary and all its achievements, CAP also will be looking forward, and planning out, the next 15 years.
“It’s such a weird time to hit a benchmark year, partly because it is such a time of reflection. But it is also a potential launching pad to move forward with strength and intentionality around making sure that college postsecondary access is not only equitable, but actively anti-racist,” she said. “We have a great opportunity, where we as schools and individuals can put our time and energy and focus systems of change. All of it can change.” 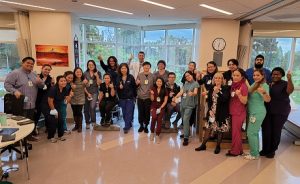