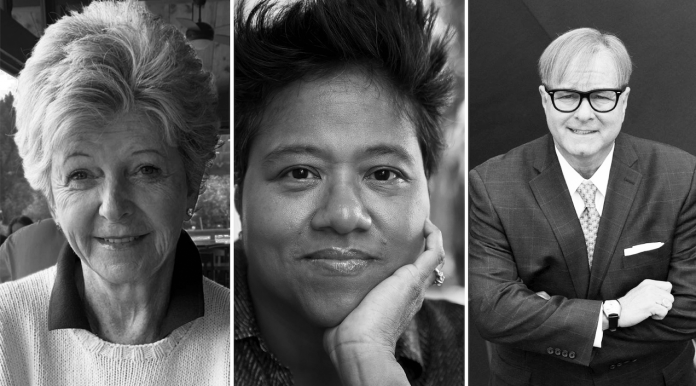 Muse/ique, Pasadena’s pioneering live music organization, have announced the appointment of three new members to its board of directors: Barbara Franks Bice, Christine Swanson and Jonathan Weedman.
The board, chaired by philanthropist LeeAnn Havner, provides leadership in carrying out Muse/ique’s mission of making music accessible to all through adventurous and meaningful programming, an effort continued throughout the pandemic with drive-in concerts, lawn serenades, and “In a Minute! (…or Two!)” video series, which recently surpassed 100 episodes.
“To serve as chair of Muse/ique’s board of directors, is to be part of an inspiring and passionate team,” said Havner. “With much enthusiasm, we welcome to the board our newest members: Barbara Franks Bice, Chirstine Swanson and Jonathan Weedman, all of whom bring a breadth of experience and expertise that will help bring to fruition Muse/ique’s adventurous plans for the future.”
A resident of Pasadena, Barbara Franks Bice is the president of the Bice Passavant Foundation, vice president of Five B Investment Company, and a philanthropist interested in the arts, scouting and social-emotional learning. She is a former educator with the San Marino Unified School District, having spent 20 years in the district as an AP English teacher, founding director of the Career Education Program and the Career Center at San Marino High School, and founding executive director of the San Marino Schools Foundation. In higher education, Barbara served on the Scripps College board for 13 years and has served on the boards of the Sycamores, L.A. Family Housing, and Queens Care Health Alliance. Additionally, she served on the board of the Western Justice Center in Pasadena, and currently serves on its Leadership Council. She also served as an advisor to the Public Interest Law Foundation of the Gould School of Law, which is now named after her. Barbara’s husband, Scott Bice, is an alumnus of the Gould School of Law, where he has taught for more than 50 years and served as dean from 1980-2000. Barbara was also the first woman member of the Rotary Club of San Marino and served as a founding board chair of True Connection, which promotes social awareness and provides emotional intelligence education to children and adults.
Christine Swanson earned her MFA in film from New York University’s Tisch School of the Arts and was selected by its faculty as the Willard T.C. Johnson Fellow, the most prestigious fellowship given to the student who has achieved high standards in his or her work. CNN identified Christine as one of the most promising filmmakers to emerge from NYU’s graduate film program since Martin Scorsese, Ang Lee, Oliver Stone and Spike Lee. She earned a BA degree in communications and Japanese from the University of Notre Dame. Christine has developed, written and/or directed movie projects for HBO Films, Magnolia Pictures, State Street Pictures, TV One and Faith Filmworks. Christine received a 2015 NAACP Image Award nomination for Outstanding Directing in a Television Motion Picture for “For the Love of Ruth.” Other award-winning projects Swanson has written and/or directed in her career include “Two Seasons” (winner HBO Short Film Competition, Sundance selection), “All About You” (winner Audience Choice Award at Chicago International Film Festival, Grand Jury Prize at Hollywood Black Film Festival); “All About Us” (invited to the prestigious Heartland Film Festival, The Chicago International Film Festival and the Cannes Festival du Film Panafricain); and “Woman Thou Art Loosed” (Santa Barbara International Film Festival and Blockbuster Audience Award for Best Feature Film at the American Black Film Festival). Swanson, who is also a professor for the University of Georgia’s MFA Screenwriting Program, resides in Los Angeles with her husband, Michael, and their children.
Jonathan Weedman has enjoyed more than 30 years of extensive professional experience working in the corporate, nonprofit and community sectors. This includes currently as a consultant for several nonprofit organizations in the areas of fundraising, project development and management, board recruitment, and building strategic partnerships to further strengthen the organization. Prior to that, Weedman served as the sixth executive director for Gay Men’s Chorus of Los Angeles, a nationally recognized performing arts organization where Weedman made significant contributions to strengthen the organization’s infrastructure, fundraising performance and advance GMCLA’s artistic achievements. For more than 20 years, Weedman served as senior vice president for the Wells Fargo Foundation and directed the company’s philanthropic, volunteer and community engagement programs for the Southern California Region and state of Arizona, with an annual contributions budget of over $20 million. He also served as Cultural Affairs Commissioner for the City of Los Angeles, appointed by Mayor Antonio Villaraigosa, and was founding chair of the Grand Park Foundation. He has served on the board of directors for the Los Angeles Philharmonic, Colburn School, Inner City Youth Orchestra of Los Angeles and is chair emeritus of the Young Musicians Foundation. A third-generation Californian, Weedman attended USC and UCLA, and is the grandson of former California Gov. Goodwin Knight. He and his husband reside in Altadena.
Led by Founder and Artistic Director Rachael Worby, Muse/ique is a dynamic, nonprofit performing arts organization that creates exhilarating live music adventures, including Around Town, Summer at the Huntington, and Offstage. For further information, visit muse-ique.com.