Heading into Christmas, the Salvation Army Pasadena Tabernacle will be rejoicing for all to hear, and perhaps a little more exultantly this year.
That might seem odd during a pandemic year that has brought immense challenges and fear to the nonprofit and the hundreds of clients it serves, but the Tabernacle recently received a year-end gift that will help change the course of its history by providing housing for the homeless and more than double the number of people and families it can serve at its Walnut Street campus.

Local philanthropists John and Diane Mullin have gifted $5.65 million to the Salvation Army’s capital campaign, which now has garnered enough to officially kick off the construction of a 9,000-square-foot facility. It will be called the Diane and John Mullin Hope Center.
“When we embarked on this capital campaign it was a just a leap of faith, just trusting that somebody, somewhere in the community would give us a lead gift,” said the Pasadena Tabernacle’s Capt. Terry Masango. “For a long time, we were working from small pledges, and we really wondered how long it might take like that.
“Well, when the Mullins responded to that call — when I got the news of this large donation, I just started dancing, then my wife started dancing, and then I called the capital campaign team members and they were literally in tears when they found out.”
The new Hope Center will more than double the space available for social service programs and create 65 units of permanent supportive housing for individuals experiencing homelessness, with 16 of those units reserved for veterans and six earmarked for women participating in the Salvation Army’s alcohol and drug recovery program.
“This project was initially just a dream based on the need — there is a huge need for social services to support our community, and we were in desperate need of improving our space and increasing our square footage to help more families,” Masango said.
“With this large donation, not only does it mean we were able to reach our goal, it means that people in the community — like the Mullins — want to solve the problem of homelessness and food insecurity,” he continued. “Our neighbors want to see change; they will not just sit idle and watch children and families fall into decay. … They are stepping up and doing something very real.”
The Mullins, meanwhile, said they knew right away they wanted to have a part in the Salvation Army’s new project proposal in Pasadena. The couple had long been involved in the nonprofit throughout Los Angeles County, initially through charity work at the Rotary Club of Los Angeles, considered to be one of L.A’.s leading business and civic organizations.
One of their first assignments together was a red kettle bell ringing on Wilshire Boulevard in 1993 that they really enjoyed, noted Diane Mullin.
“The Salvation Army doesn’t just take people and families in to feed and clothe them, but the organization rehabilitates them so they can rejoin society and become productive members again,” Mullin said. “The people at the Salvation Army are so selfless, they are really in it to give back. They never turn anyone away, no matter what they are suffering through. I’ve never been involved with an organization quite like them. So we were on board [with their project] and we are putting all of our eggs in this basket.” 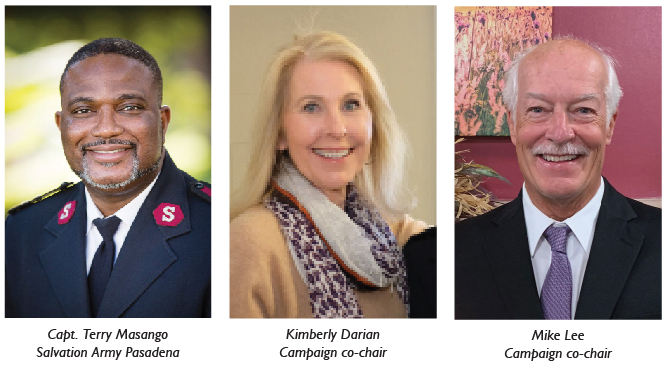 She also had some personal experience with the Pasadena Tabernacle, she recalled, that made her feel its cause more acutely. Years ago, a daughter of a dear friend of hers fell into some trouble and slipped into homelessness on the street. Using a connection at the local chapter, Mullin reached out to see if anyone could help find the young woman. Shortly after that, the volunteers not only found her, but were able to bring her in to the facility and help her begin a path to recovery.
“That touched us so much,” she said. “When we became aware of this project we knew we wanted to get involved because we know firsthand the work they do and the impact they make.”
At the new housing facility, the Salvation Army will offer subsidized rent and extensive, case-managed supportive services for homeless people who have experienced long-term disadvantages, including disability stemming from mental illness, health conditions, mobility or sensory impairment and/or a history of severe addiction. Each apartment will be fully equipped with a kitchen, bathroom and furnishings, and the facility upgrades will enhance the services offered, including case management, client service referrals, job training and life-skills workshops, including financial literacy guidance.
One of Masango’s favorite aspects of the new facility will be the much improved food pantry, which will now be called the Client’s Choice Food Bank. Food demand currently is five times greater than it was in February, about the time COVID-19 began to hit, highlighting the dire need for a larger space and more storage. The new facility will allow people to queue up inside the building instead of waiting in the long line out on the street, “so they can retain their dignity and not face ridicule or shame while they wait,” Masango added.
“We have a saying that a person can be down but they’re not out. We can help those families rise again and we can build better citizens for tomorrow,” he said. “At the Salvation Army, we do good work, but we cannot do it without generous community support, like that of the Mullins. We are privileged to act as the conduit that links those in need with those who can provide that support.”

Philanthropy has long been an important aspect of John Mullin’s free time, and choosing the Salvation Army as the destination for a large gift was an easy decision. The 80-year-old real estate company owner said he can’t wait to see the new facility: “It’s going to be great; I’m very enthusiastic about it. I’ve been very fortunate, lucky and blessed with having made a fair living during my life … and there are no pockets in my coffin,” he added, chuckling lightly.
“I have traveled around the world a bit and seen a lot of poverty in other countries, and I’ve also seen poverty in this country. You can drive down [a nearby boulevard] and see all the tents lined up — some of them even have Christmas trees out front. Well, there are children in those tents, and it just breaks my heart to know there are children living out of cars and tents,” he said.
The organization is also fiscally responsible and trustworthy, he added: “I believe the Salvation Army, for the most dollars, is where the rubber meets the road. Many times, dollars get set apart for administration or costs that have nothing to do with the work, but when it comes to the Salvation Army the dollars go exactly to where it’s needed, to direct services.”