Much has changed in the area since 2000, with local football programs having their ups and downs and coaches on the move. The sport of football and its players have certainly evolved in the past two decades, but there remains one constant in St. Francis High School football.
The Golden Knights are a consistent power in the football world, with 18 CIF Southern Section playoff appearances in the last 19 years — a remarkable feat for Jim Bonds, who is entering his 20th season as St. Francis’ head coach.
“A few people had asked me about how many years, and I had to go back and do the math,” he said. “I saw that it’s going to be 20. I can’t believe it.”
That kind of loyalty to one school is rare nowadays, and Principal Tom Moran is glad Bonds chose St. Francis in 2000.
“It’s remarkable,” Moran said. “I’m sure he has had opportunities and will continue to have them. We’re very blessed he’s decided to make St. Francis his home.”
Teaching and coaching at one school has been Bonds’ goal since he was a senior at Hart High School in Newhall. He was a two-time All-CIF quarterback and led his team to a CIF-SS championship in 1986. Even while he was one of the best quarterbacks in Southern California, Bonds envisioned himself as an educator.
“Back in my high school yearbook, where it asks, ‘What do you want to do?’ I said I wanted to teach and coach football,” Bonds said. “I had that idea based on some of the teachers and coaches I had in high school. I thought I had some really good ones.”
Bonds, 50, had even better coaches when he played quarterback for UCLA from 1988-1991, such as legendary Bruins head coach Terry Donahue and offensive coordinators Homer Smith and Rick Neuheisel.
Bonds was unable to carry his high school success over to the collegiate level, with competition in Westwood that included Pro Football Hall of Famer Troy Aikman and Tommy Maddox. Bonds started several games as a junior but ultimately lost the job.
“I wouldn’t trade my UCLA experience for anything,” he said. “Even though I would have loved to have played more, I had two years to watch Troy Aikman play and sit in the same quarterback room with him. I watched him prepare and be coached and be coachable.
“You go through different steps on the ladder. You go up and get knocked back down. Being booed off the field at the Rose Bowl helped me. It was a humbling experience, and I think that helps me as a coach.”
That humility is what makes Bonds one of the best coaches around, according to SFHS’ president, Father Tony Marti.
“Jim Bonds epitomizes what a sports coach should be,” he told The Outlook. “Jim is a great coach and a man of integrity presenting the best Franciscan values of our school. Jim contributes to forming the character of our Golden Knights. Under his direction, our players show sportsmanship at all the games and think first of the team, looking at each other as brothers. We are grateful and proud of Jim Bonds.” 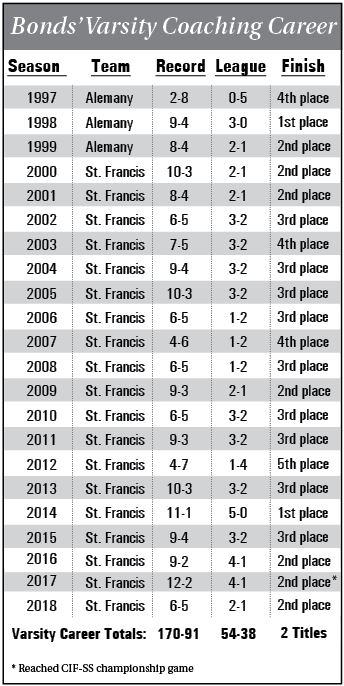 After graduating from UCLA in 1991, Bonds was asked by Donahue to work with him at his camp held at UC Irvine. The former Bruin quarterback enjoyed his experience teaching young athletes and soon reached out to legendary Hart head coach Mike Herrington.
“He said, ‘I could use you on the JV team. You can call the offense for the team.’ That was my first year out of college,” Bonds said. “I was substitute teaching, married with a son on the way at 23 years old.”
After one year of helping Herrington, Bonds saw an opportunity when reading a story by reporter Eric Sondheimer about Bill Redell accepting the coaching position at St. Francis prior to the 1992 season. He had gone to college with Redell’s son and was on the legendary coach’s team in an all-star college game. Bonds called Redell, expressed his desire to work with him and was given a teaching job along with the position of offensive coordinator for the varsity squad.
After four years under Redell, Bonds felt he was ready to take on a head coaching position and took a job at Alemany High School in Mission Hills.
Bonds managed to turn the program around after a rough first season and won a league title in 1998.
Redell left St. Francis for Oaks Christian in Westlake Village after the 1999 season, and Bonds was quick to apply for the position. Though he appreciated the opportunity at Alemany, his heart always remained with the Golden Knights.
“I loved it here,” Bonds said. “I liked my time here, as well as the people, the administration and the families. I wanted to come back, and I knew it could be a long-term thing.”
Bonds was hired as St. Francis’ head coach in 2000, and the longtime mentor has relished every moment.

“Friday nights at Friedman Field are awesome,” he said. “That might be one of the things that keeps me coming back.”
Bonds has developed quite the culture at St. Francis, attracting local high school football fans and former players to fill the stands and sidelines during every home game.
“We have past players who return, some of whom didn’t get any playing time,” said Moran. “He’s one of the first guys they ask about, and that says a lot. It’s not about him taking care of star players. He takes care of all his kids and staff.”
The St. Francis coaching staff nearly celebrated the program’s first championship since 1964, but a missed field goal as time expired gave Rancho Verde a 44-42 victory and the CIF-SS crown in 2017.
“Man, I won one as a player,” Bonds said. “I thought this was easy. It is so much harder as a coach when you’re not out there making plays. We’ve been to the semifinals six times and the finals in 2017. I hope we get another opportunity. I think I value coaching and teaching more than a CIF championship. Don’t get me wrong, I want to win it. If it comes, it will come.”
The biggest challenge for Bonds came prior to the 2018 season when he was diagnosed with cancer. The St. Francis head coach battled it off and joined his team despite reports that he might miss part of the season.
“That whole experience gave me a new perspective on a lot of things,” he said. “Friendships, marriage, relationships with kids, I’m not taking any of that for granted. What an unbelievable job I have that is called work. You know the old saying of doing something you love and you’ll never work a day in your life? That’s how I feel here with the people I work with.”
Bonds has always been patient with players and students the past 20 years, but he’s also learned to be that way on the field with another group of people.
“I think I’ve gotten better with officials,” Bonds said when asked what’s changed since he took the job in 2000. “I’ve taken it a little easier on them. Every once in a while, there’s a bad call and I can’t help myself. So you can say I’ve learned a bit over the years.”