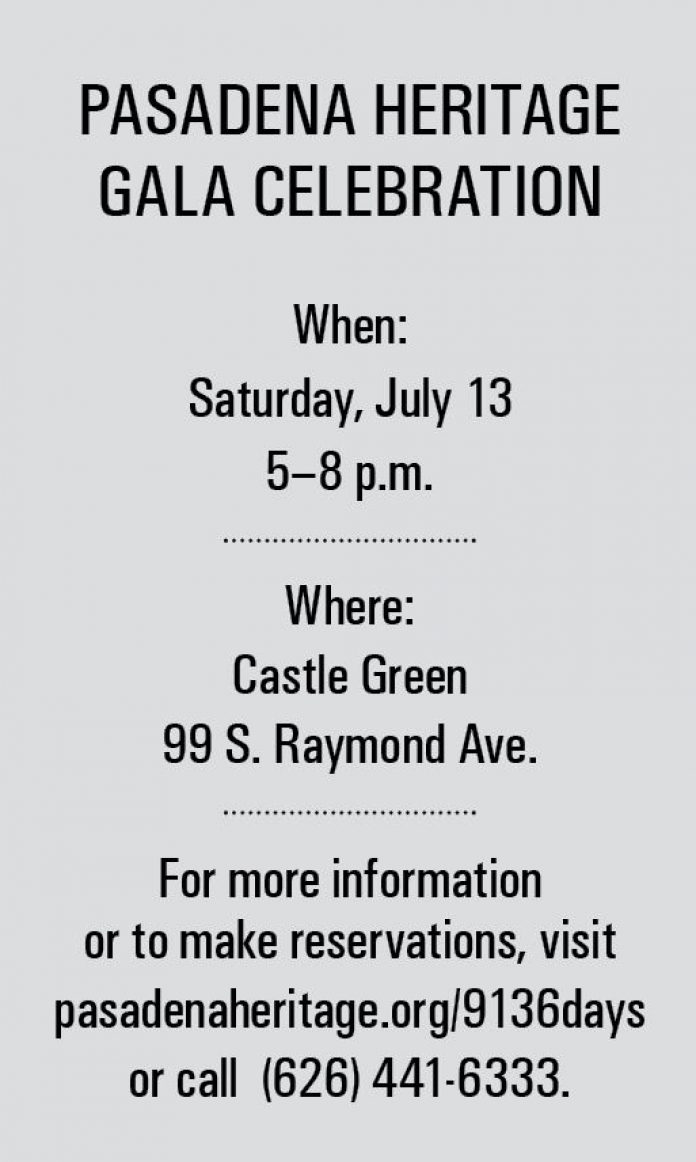 It’s hard to imagine a Pasadena without the Colorado Street Bridge, stately City Hall, renowned Greene & Greene homes or the turn-of-the-century, red brick landmark buildings that, united, make up historic Old Town, widely seen as an enviable example of urban revitalization across the nation.
Yet the loss of such assets is nearly what happened back in the 1970s, and many times since, before Pasadena Heritage rose to protect some of the city’s most iconic and idyllic structures, buildings, grassy knolls and everything in between. For 42 years and counting, the nonprofit organization has worked diligently — sometimes loudly and visibly, other times quietly, behind the scenes — to protect the city’s historic resources and strengthen policy to foster preservation, resulting in a beautiful place to live.
So how does a nonprofit go about saving a city? Pasadena Heritage Executive Director Sue Mossman, who has spent 40 years behind the nonprofit’s mission, can tell you: Bit by bit, block by block, fight by fight.
“There’s a breaking point where you’ve lost too much, you’ve changed too much or lost your sense of identity and it’s no longer the place you knew it to be. It’s a constant battle,” Mossman said. “So often, it’s not a vision or a ‘good of the world’ concept that seems to be driving those decisions; it’s the business profit mode of projects being planned by companies that aren’t planning to stay here — that’s not the building they’ll keep.”
Mossman has led the charge at Pasadena Heritage as executive director for the past 25 years, helping to build the nonprofit from an informal citizens group concerned about a rapidly changing, ever denser urban landscape. Whereas the group’s first office was operated out of the trunk of a car and spread out over dining room tables across the city, Pasadena Heritage now has a hard-won seat at the table in city planning (“Sometimes,” Mossman emphasized with a laugh).
The nonprofit will celebrate Mossman and her nearly 9,140 days at the organization on Saturday, July 13, at the historic Castle Green, one of the city’s most treasured gems, although it would be difficult for Mossman to name favorites, she admitted. Sitting down to discuss her tenure and some of the nonprofit’s most treasured victories in preservation, Mossman began by heavily crediting all those who’ve helped along the way. 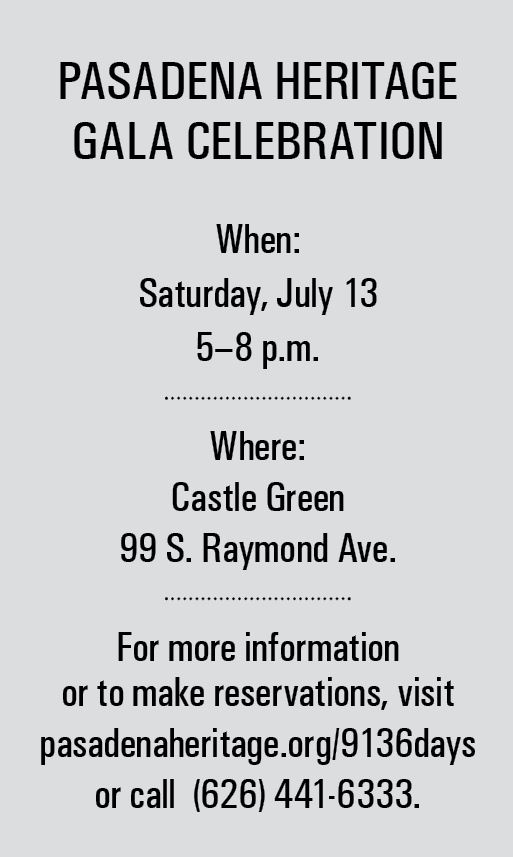 “I’m so honored and delighted to be celebrating 25 years as the leader, but I have not done anything by myself,” she noted. “It’s an enormous team effort with a great staff, and it always takes a whole army of people to champion these causes, to write letters, send emails, talk and show up and everything else it takes to get our job done.”
Like many proponents of preserving Pasadena’s historical landmarks, Mossman came into the circuit as a relative newbie all those 40 years ago, spurred by the simple desire of knowing more about the city and the old craftsman bungalow in Madison Heights she and her husband had recently purchased. “It needed so much work,” Mossman recalled. But when she joined a bus tour with the late Robert Winter, a famed connoisseur of the local Arts and Crafts movement, Mossman and her husband were sold “hook, line and sinker.”
One of the first big fights was to preserve Old Town Pasadena, which had suffered years of dilapidation and blight, and which developers were eager to raze so they could build anew — a period that might be called the “scorched-earth policy days,” to make haste for the booming corporate return to urban America.
One of Pasadena’s saving graces, she reflected, may have been that it remained a sleepy town all the way through the early ’70s, so that when developers emerged locally, residents had already seen other much-loved cities rendered unrecognizable. They even wore T-shirts that read “Pasadena NOT Westwood.”
“That was a huge impetus for us, to see Westwood or other cities that had lost themselves. We saw firsthand this charming little village of a town explode with high rises; it very much influenced us,” she said. “But because Pasadena had remained sleepy, we had a lot more here that was unchanged, untouched, and by the time the redevelopment behemoths arrived in town, you could clearly see the difference of what we were going to lose. And it was not a pretty one!”
That first big win — saving Old Town from demolition — became more apparent as it became some of the hottest real estate in the city (Pasadena Heritage was itself gentrified out of its first real office above Colorado Boulevard when it could no longer afford the rent, laughed Mossman). City officials, along with developers, recognized that historical preservation might not be just the right thing to do, but a profitable one at that. The real victory came in shifting the city’s policy to recognize the importance of its inheritance, she noted, adding: “Getting the city to do an about-face and to embrace and commit to the historic downtown, that was HUGE.”
The nonprofit used that early win to push its mission forward, bit by bit. Every battle has felt a bit like David and Goliath, Mossman noted, recalling the mission to save the 1958 Stuart Pharmaceutical Co. building. Built in the heart of the midcentury movement, it was a long, low, white and dramatic building that was one of its architect’s signature pieces, and Pasadena Heritage knew it needed to be saved. Johnson & Johnson had bought out the company for its key Mylanta stomach acid patent, and wanted to tear it down.
“It was just so incredibly obvious to us that this building needed to be preserved,” she said. Mossman recalled traveling to Sacramento for Pasadena Heritage to testify how important the building was, and the feeling in her gut when 14 corporate men in suits and shiny shoes filed in to dispute her.
“That was a moment! Boy, did I feel really overwhelmed,” she laughed. In the end, though, Pasadena Heritage prevailed, and the building was preserved. Even in hindsight, Mossman is undeterred. “We were right, and the building was important, and it was valuable and should be a landmark resource.”
Some might call it moxie, but Mossman has a surprisingly quiet, calm demeanor for a purpose and stance that were otherwise considered to be rabble rousing back in the day. When it first began, the Pasadena Heritage nonprofit volunteers were often seen as staunch opponents of modernization, the nonconformists or the “antis.”
One of the early executive directors, Claire Bogaard, recalled organization members being treated as thorns in the side of the powers that be, and by others who really just had no understanding of what they were trying to achieve. Eventually, people came around, she noted, recalling an incident a few years ago at a local restaurant, where a man approached her out of the blue.

“On my way out, he told me, ‘I wanted you to know that I used to think you were all really, really crazy. But you’ve really saved Pasadena,’” Bogaard said, laughing. “It was a great moment for me. It’s exciting when we have those kinds of interactions.”
Bogaard, who served some 11 years as executive director and still sits on the board, said Mossman has brought grit, consistency and level-headedness to the nonprofit during what have been some heated, tumultuous cases.
“Sue has great leadership skills and has built really solid relationships with City Hall — they call on her all the time. She’s very solid and thoughtful; she has a very gracious manner about everything,” Bogaard said of her friend. “She gets up and makes her case, she stays right on point, and she believes very strongly in it, which helps a lot. She knows the laws and rules and regulations and is very skilled and well-versed in it.”
One big lesson that Mossman conveyed, and that Bogaard noted, is that the fight to protect historical preservation is constant. Just because one battle is won doesn’t make it so forever, especially with ever-changing political leaders and policies.
Mossman recalled that lesson vividly with regard to the Stuart Pharmaceutical Co. building: Soon after winning that first round, in came the county Metropolitan Transportation Authority with different plans to raze it for a parking lot: “First came the commercial interests, and then the government transportation interests — everyone has their priorities.”
That perpetually vigilant eye on what is pure and true to the city’s architecture is what made former board member George Penner, CEO of the Deasy Penner Podley real estate firm, an early supporter. Penner has remained an active partner of Pasadena Heritage over the years, offering vital financial support to the nonprofit.
“When I first moved here, the sense of community and architecture, with the abundance of mature and beautiful elm and oak trees, the aesthetics of the city have always played an important role to me — Pasadena is an incredible place to live,” said Penner. “Pasadena Heritage has taken the responsibility of bearing the burden for important issues throughout the city, which is always changing. Of course, we want the best use of properties and homes for existing residents but, as times evolve, those changes can be done in an appropriate manner that respects the standing architecture around them.”
Penner praised Mossman for her dedication.
“Sue is a remarkable woman with extraordinary passion for the city architecture and just really wanting to do the right thing,” he added, noting that always being the underdog is not easy. “She’s small but mighty, and has the tenacity to stick up for what she believes in.”