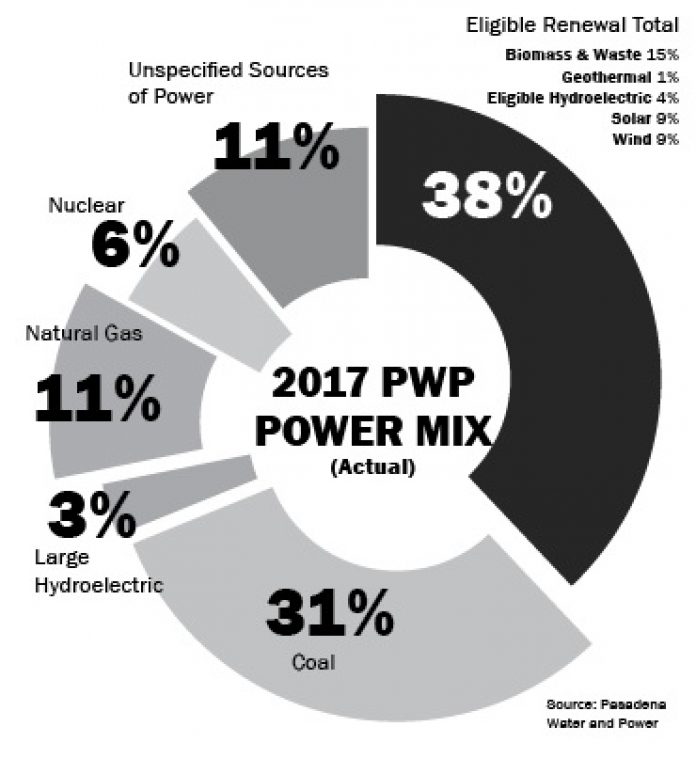 It’s no secret that California has become one of the nation’s leading states in the call to action on climate change, but in Pasadena, a small group has become a behind-the-scenes force for environmental consciousness in a city that also considers itself in the vanguard of efforts to leave a smaller carbon footprint.
Pasadena 100, an advocacy group pushing for Pasadena Water and Power to offer 100% renewable energy by 2035, believes the utility can ease the path by no longer renewing long-term fossil fuel contracts and also factor in the “social cost of carbon” — the total negative impact of fossil-fuel emissions on the planet, environment and health measured in dollars.
And though many praised Gov. Jerry Brown’s recent signing of a clean-energy bill — Senate Bill 100, which requires the state to source carbon-free utilities for electricity by 2045 — Pasadena 100 believes that it’s feasible to move away from “dirty fuel” even sooner. The city also has maintained it supports the idea, within the constraints of keeping costs low and the lights on, while trying to get the public utility’s energy as clean as possible.
“We feel that a city with an abundance of brilliant thinkers should be leading the conversion to 100% renewable energy,” said Pasadena 100 co-founder Therese Brummel, who also helped to create the umbrella group Transition Pasadena, which focuses on building resilient communities in the light of climate change. Brummel and other Pasadena 100 members attend the city’s Environmental Advisory Commission meetings and have their own steering committee that meets monthly.
Brummel said she is just one among many who are vocal about avoiding new contracts for fossil-fuel energy beyond late 2027, when solar energy plus storage are projected to be more cost effective than gas generation.
“The American natural gas system is leaky at extraction and storage, and NOT a good ‘bridge’ energy source,” said Brummel, who at meetings often brings up the larger picture of climate change, like the accelerating rate of species’ extinction. “I like to say I’m carrying the heart of climate change for Pasadena 100. I go to talk about species extinction and my grandchildren growing up in a healthy world. … People know we are living in dangerous times, but climate change doesn’t seem to stay in the forefront of their minds.”
John Odell, a Pasadena 100 participant, said he became involved to help support better alternatives to create electricity and to ask the city to better monitor the social costs of carbon. The retired USC professor is also a member of the city’s Stakeholder Technical Advisory Group, created to help focus public opinion and expertise to develop Pasadena Water and Power’s new Integrated Resource Plan. The IRP is a 20-year blueprint for energy contracts and sources that will be presented to City Council by the end of the year.
“I was alarmed at what was being done to combat climate change. We should be concerned about the costs of energy, yes, but we should be concerned about all the costs. The bill we get reflects the direct costs but doesn’t reflect the other indirect costs from climate change,” said Odell, adding that the city “is working very hard to be receptive.”
Although this is the city’s third IRP report, it doubled down on efforts to garner public input, holding community meetings and an online survey, and ensured representation from key interest groups on STAG, including residents, businesses, special-interest groups and policymakers.
“Pasadena is steadily working toward reducing its dependence on fossil fuel, which supports the objective of many environmentally minded groups,” said Mayor Terry Tornek. “Our goal is to have a carbon-free future. The challenge for Pasadena is to balance the green objectives with objectives related to reliability and cost to customers. Our current IRP planning process is attempting to meet all those objectives in a balanced way.”
Pasadena Water and Power generates and acquires a diverse range of energy types, and is ahead of the average across California. As of 2017, about 38% of the city’s total comes from renewable resources such as solar, wind and geothermal energy; in comparison, the rest of the state averages about 29% from renewables. Though about 31% of the city’s energy is from coal, that figure is seen as being slashed in 2027 when the utility’s contract with the coal-fired Intermountain Power Plant project in Utah expires. After that, Pasadena will no longer have coal as part of its energy portfolio.
While there are plans to convert the IPP plant to natural gas by 2025, Pasadena likely will not participate in the converted facility project, said Mandip Sampra, the city’s power resource planning manager.
Sampra, a local resident, said she personally does her best to reduce her carbon footprint, including walking to work or taking her hybrid. She’s been paying close attention to the collaboration and “very progressive stakeholder input.”
“It’s been a very respectful process and a very positive experience for me. Collectively, the community as a whole can do a lot of things that are more environmentally friendly,” said Sampra, adding that the city is working hard to include the social cost of carbon. “Pasadena Water and Power is here to balance costs, compliance and environmental stewardship; we’re trying to take a very pragmatic approach to compliance. We are working closely with our stakeholder group as to identifying a good consensus point on how to address the social cost of carbon.” 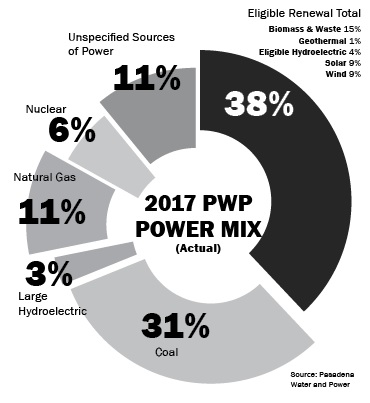 City Councilwoman Margaret McAustin, who is chair of the Municipal Services Committee (which oversees PWP, a $200 million utility enterprise), noted that the city’s Glenarm Power Plant was upgraded in 2017 and is now one of the cleanest of its kind for being run on natural gas. The city is required to keep it running to back up the power grid if all else fails, she noted.
“Pasadena has always been progressive in its movement away from fossil fuels and toward a clean energy portfolio,” McAustin said, noting that she sees the tide turning in the climate-change debate, with the last community outreach meeting garnering more than 100 citizens. “It was the biggest meeting I’ve ever seen, and all those who were there were reflective of the concern and the alarm about global warming. The impacts of global warming are now in front of us every single day. … That went from being just a concept scientists talked about to all of a sudden our trees are dying, our plants are crispy; we’re experiencing it at this higher level and it’s now a part of everyday life.”
Moving toward a 90-95% carbon-free portfolio may be viable and cost effective by 2030, but because of the need for local generation capacity to ensure the availability of electricity, it may be cost prohibitive to eliminate the use of that resource, city officials said.
“Staff is analyzing the feasibility of securing a renewable fuel source for the local plants, which could result in a 100% carbon-free portfolio for Pasadena. The portfolio will still include zero carbon but non-renewable hydroelectric and possibly nuclear generation after 2035,” Sampra said.
Meanwhile, Pasadena 100 and Transition Pasadena will continue to work to influence policymakers to speed the transition to renewables and think outside the box to reduce the community’s carbon footprint. For some, that might include growing their own food, eliminating beef from their diet, having solar roofing, repairing old appliances to reduce landfill waste or driving electric cars. One Transition Pasadena member, Peter Kalmus, a Jet Propulsion Laboratory climate scientist, has written a book called “Being the Change — Live Well and Spark a Climate Revolution,” about living a life without fossil fuels.
“Beyond persuading local government to switch to renewables, members are taking climate action into their own hands in a variety of ways, all of which are designed to reduce their individual carbon footprint,” said Pasadena 100 member Christle Balvin. “All of these people live locally but have come to recognize that the solutions to climate change cannot wait for big government to solve it. We all must help.”
To find out more about Pasadena 100 and Transition Pasadena’s monthly events, visit transitionpasadena.org.

A Day in the Life at ECS

Circle of Friends Brings Community Together