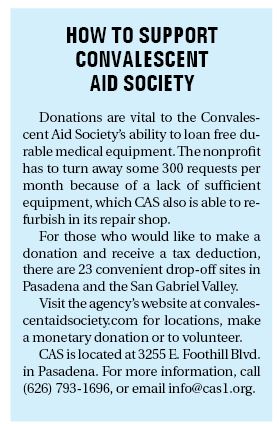 Then she met Convalescent Aid Society. It was the one bright spot during a dark time, she said, recalling the nonprofit as the easiest stop on the healthcare circuit.
“They had us like a ball, bouncing back and forth, seeing so many different specialists, one after another after another without any diagnosis,” the single mom of five recalls. Her nearly adolescent son could barely squeeze into his childhood wheelchair, which was hurting his fragile frame.
“We had been having so much trouble,” said Macias, noting that she had tried for years to get her young son a larger, upgraded wheelchair. “The insurance kept telling me they had nothing for him. It was really tough. Then, his school told me about CAS and that they had already called and there was a chair ready for Miguel and they even went to get it for us and brought it over. It was such an amazing, kind thing.”
As it turned out, one of the school psychologists had a relative who also had used CAS’s durable medical equipment, and recommended the group to Miguel Macias. And that is how the Pasadena nonprofit, in its 94 years of existence, has grown to have more than 27,000 clients in the San Gabriel Valley with equipment out on loan: by word of mouth.
“It always amazes me how many people in the community know about CAS; since we don’t do a lot of PR,” said CAS Board Chairwoman Bobbi Abram. “It’s an organization whose service really precedes its name. It’s really only when you need that durable medical equipment do you hear about it from other people. It’s interesting to see the goodwill that it has in the community is widespread.”
Occupying a nondescript, squat orange building on the corner of Foothill Boulevard and Sierra Madre Villa Avenue, CAS has wide access handicapper entrances and a clean, comfortable waiting area for those signing up for services, picking up or dropping off equipment.

It’s a no-frills operation, the staff says, but one they know meets the need.
“There is no other nonprofit anywhere in Southern California that’s doing what we’re doing, providing free medical equipment to residents,” CAS Executive Director Mark Waterson said. “I know this because we get calls all the time from people 50 miles away, asking if they can use our services. We try to refer them to other agencies or churches that sometimes try to fill in the gaps.”
CAS provides the services free to residents of the San Gabriel Valley, and has 23 strategic drop-off centers in the area for those wishing to donate equipment. During the past fiscal year, CAS loaned out about 11,500 pieces of durable medical equipment, which is up by about 40% over the last three years. There is no time limit on the loan, so clients sometimes keep equipment for 10 or 15 years, Waterson notes. Oftentimes, it doesn’t find its way back at all, with about 10-15% of the equipment never returning.
Waterson said he has come to realize this is just part of the process, since the equipment is often used by people in transition. “If they pass away or have to move into a facility, the last thing their loved ones think about is what to do with the equipment. Often they don’t even know where it ever came from,” he said.
But the lack of returned equipment does affect how many people the agency can service, adding that CAS has to turn away about 300 people per month for lack of available equipment.
That equipment includes larger medical devices, including hospital beds, wheelchairs, power chairs and lifts, but also smaller, seemingly insignificant pieces such as shower chairs, forearm crutches, walkers, canes and bathroom commodes and railings. Those smaller items can be just as important to people recovering from an injury or trying to stave off injury and maintain their independence.
“Every day, I’m gratified by clients who come in and tell us how much having a specific piece of equipment has helped them stay in their home near their family and friends, and given them an increased independence,” Waterson said.
On a recent Friday afternoon, CAS buzzed with the activity of cars pulling in and out and clients inside patiently waiting and chatting on the couches while staff prepared their items to be taken out.
Each piece of equipment undergoes a thorough sanitization in the “Hubscrub,” a machine large enough to clean and disinfect wheelchairs and beds.
One client, Marie Holguin, said she has been coming to CAS for almost 20 years to donate and borrow equipment. She’s referred multiple people over the years, including friends, and family, like her nephew, who is paraplegic. This day, she stopped by to pick up a wheelchair for herself. Since her stroke, she relies on forearm crutches to walk, but the exercise is too difficult for longer walks.

“I’d just like it to be able to go to the shopping centers and enjoy the time outside,” Holguin said.
She praised the center and the people working there.
“I come here all the time, sometimes to donate and sometimes just to replace the pads on my crutches. The people here are so, so, so nice,” she said, smiling and pointing out a woman behind the counter, “like that Judy over there; I want to buy her flowers.”
The “Judy” behind the desk, Judith Niles, has worked at CAS for 13 years, and is a warm and familiar face to those who frequent the center or even who are first-timers. She often darts around the counter to dole out a hug, squeeze a hand or give a listening ear to anyone who looks like they need it.
“A lot of people who come here are having a hard time. There are a lot of elderly people who are trying to take care of other family members, their spouses … sometimes an 89-year-old taking care of her 63-year-old child,” Niles said. “I give them a hug and let them know they’re loved. It’s a pleasure and a blessing to help people in their time of need.”
That’s a common thread among the CAS staff, Waterson admits, noting that the organization is a great place to work because people leave happy. The group also emphasizes compassion among its staff, who also often are natural caregivers and feel rewarded every day by helping others.
“We view our interactions with clients as just as an important part of our mission as the actual loaning of equipment. As you can imagine, if someone is in need of an item from CAS, they (or a loved one) is going through something traumatic — so we endeavor to be helpful, comforting, supportive and kind to everyone who comes into our office,” he said.
Waterson also adds how lucky he feels to work in a city like Pasadena, which has so many nonprofits already. It doesn’t bother him to be a little fish in a big pond, noting that the community support and partnerships also are plentiful because of that.
“We have a client who is facing a very long road to recovery, and she needs a very specific kind of wheelchair. We don’t have that kind of chair but I reached out to four different nonprofits in the area asking for help, and all four got back to me right away.”
The CAS is also expanding its reach. The organization opened a location about two years ago in Whittier, in partnership with the First United Methodist Church. While open twice a week, CAS may look to increase that with the addition of a Hubscrub sanitizing machine. Such as at its current Pasadena location, Waterson expects word of mouth to give the group a large fan base.
Philip Swan, now a CAS board director, was just a boy when his grandmother first used the group’s services. She broke her hip while visiting from Colorado, and they enlisted a hospital bed and other devices for her lengthy recovery.
“The thing I really like about this organization is that there’s no fluff in the system — every dime we get is used to buy new equipment or repair older equipment,” said Swan, adding that every donation counts.
As for Miguel Macias, he loves his new wheelchair and plans on keeping it for a while.
“He loves it; it’s really helped his self-confidence because he can wheel himself and he feels safer in it,” his mom Sylvia said.