Pacific Crest Youth Arts Organization is hosting Drum Corps International at Rose Bowl Stadium on Saturday, July 1, with the Pasadena Tournament of Roses and Lone Star Percussion serving as presenting sponsors.
The event will feature more than 1,400 youth in performance with 12 drum and bugle corps, including seven of the nation’s top performing groups.
The event is part of the Drum Corps International Tour, a summer season of 100 events across the United States. The Drum Corps tour will return to the iconic Rose Bowl Stadium, bringing a dynamic lineup of world and open class corps, and marking the biggest event of its kind in California. Pacific Crest is one of North America’s most renowned performing arts programs for youth. Its core program is a drum and bugle corps, one of the nation’s foremost ensembles of its kind.
“If you love the pageantry of marching bands, the elegance of choreographed dance and the power of loud music, this event will truly deliver,” said Stuart Pompel, executive director of Pacific Crest Youth Arts Organization. “And it’s for the entire family. There is no doubt that people from every generation will love it. After all, there will be people of every generation in the stands.”
Joining the lineup of California corps, which includes Santa Clara Vanguard and the Blue Devils, will be members of the Blue Knights (Denver) and Phantom Regiment (Rockford, Illinois), who will travel west early this summer to perform at events along the Pacific Coast. 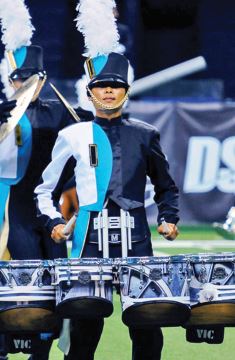 “These kids are so talented,” said Mike Riffey, the 2004 Pasadena Tournament of Roses president who regularly attends the Drum Corps event. “It’s like a professional orchestra in front of you, but they’re playing band music. I think people really enjoy the precision of the field show.”
Gates open at 4:30 p.m., and the show starts at 5:30. Tickets are $35 and $45 (with an increase of $5 each on the day of the show). Order tickets online at pacific-crest.org/tickets or by calling Ticketmaster Express automated line at (866) 448-7849.